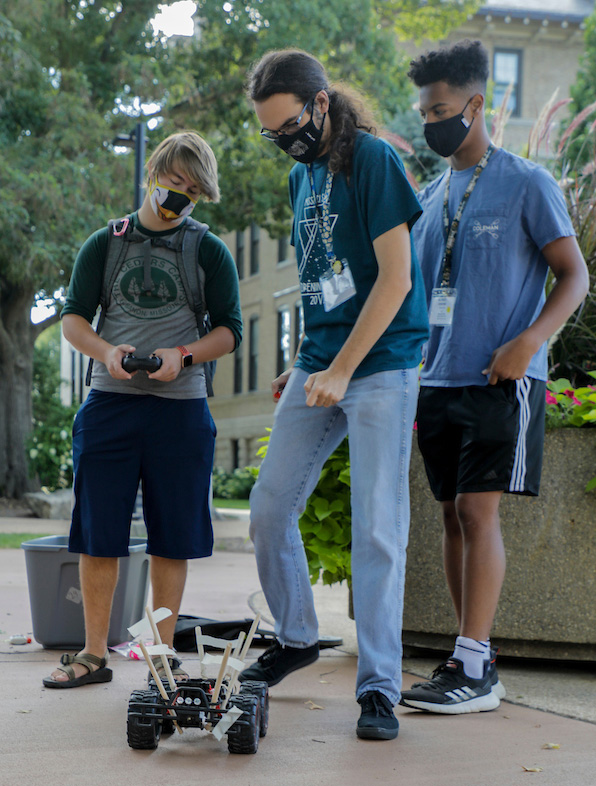 As we work toward a more inclusive campus community, and consistent with the University of Missouri Nondiscrimination policy, it is important that every member of our community educate themselves on the appropriate use of inclusive language.

Below, please find resources provided by mypronouns.org and Student Diversity Initiatives that will assist you in respecting the identities of our community members.

Often, people make assumptions about the gender of another person based on the person’s appearance or name. These assumptions aren’t always correct, and the act of making an assumption (even if correct) sends a potentially harmful message -- that people have to look a certain way to demonstrate the gender that they are or are not.

Using someone’s correct personal pronouns is a way to respect them and create an inclusive environment, just as using a person’s name can be a way to respect them. Just as it can be offensive or even harassing to make up a nickname for someone and call them that nickname against their will, it can be offensive or harassing to guess at someone’s pronouns and refer to them using those pronouns if that is not how that person wants to be known. Or, worse, actively choosing to ignore the pronouns someone has stated that they go by could imply the oppressive notion that intersex, transgender, nonbinary, and gender nonconforming people do not or should not exist.

When we refer to "personal" pronouns, we don't mean that these pronouns are necessarily private information (generally they are not), we mean that they are pronouns referring to a unique and individual person.

Singular first person pronouns (that you should continue to use, as is):

“I am a writer and wrote that book myself. Those ideas are mine. Do you like both me and my ideas?”

Singular second person pronouns (that you should continue to use, as is):

“You are a writer and wrote that book yourself. Those ideas are yours. I like both you and your ideas.”

Singular third person pronouns (that you should use as appropriate based on the pronouns the person being referred to goes by):

Each of the following sets of pronouns may be the sets that certain people indicate should be used to refer to them. Below, they are presented in the forms of most common usage.

Usually, the “they/them” pronouns set is acceptable to use when you don’t yet know if a person goes by another set or sets of pronouns. It is also possible to avoid pronouns, as demonstrated below under “no pronouns.”

Just because a person goes by a certain set or sets of pronouns is not indicative of that person’s gender. A person could be transgender or not transgender (also called “cisgender” - the vast majority of the population is cisgender) and might share the pronouns they go by. A person could be a man or a woman or both or neither and share any number of these sets of pronouns as the correct ones to use for them, but which set they go by is not necessarily indicative of their gender, even though for most people there is an association between the pronouns they go by and the gender they are.

She/Her: “She is a writer and wrote that book herself. Those ideas are hers. I like both her and her ideas.”

He/Him: “He is a writer and wrote that book himself. Those ideas are his. I like both him and his ideas.”

They/Them: “They are a writer and wrote that book themself. Those ideas are theirs. I like both them and their ideas.” Please note that although “they” pronouns here are singular and refer to an individual, the verbs are conjugated the same as with the plural “they” (e.g. “they are”). Also note that in this singular pronoun set many use “themself” rather than “themselves,” although both are typically acceptable.

Ze/Hir: “Ze is a writer and wrote that book hirself. Those ideas are hirs. I like both hir and hir ideas.” Please note that “ze” is usually pronounced with a long “e” and that “hir” and its forms are usually pronounced like the English word “here.” Some people instead go by "ze/zir" pronouns because of the more consistent pronunciation and spelling.

No Pronouns - Use My Name (example for someone whose name is “Lan”): “Lan is a writer and wrote that book. Those ideas are Lan’s. I like both Lan and Lan’s ideas.” If the reflexive component was important to communicate a message, you could use alternative language such as “Lan wrote that book unassisted” or “Lan was the sole author of that book.” Some might simply say "Lan wrote the book Lan's self."

There are additional sets of pronouns that some people might use (e.g. ze/zir, per/pers, ey/em, xe/xem, etc.). Please check with the person who goes by those pronouns and/or look for online resources to determine the proper ways to utilize them. Some people go by multiple sets of pronouns, and usually that means that it is okay to use any of the sets they go by. Some people ask that others vary the pronouns that are used within certain sets of pronouns. If in doubt about what that means for someone or to request examples of how to do that in practice, let the person know you want to be supportive and ask the person for more information or examples so that you can get it right.

Student Diversity Initatives offers a variety of workshops related to this topic. Some examples include:

Contact Student Diversity Initiatives for a training needs assessment for your student organization, class, or department.

As part of our ongoing efforts to be inclusive of all gender identities, we are pleased to announce that anyone wishing to do so may add pronouns to their email signature. Update your signature today by visiting the official university email signature creator.

You can find more information about some of the more common pronouns sets through these links: